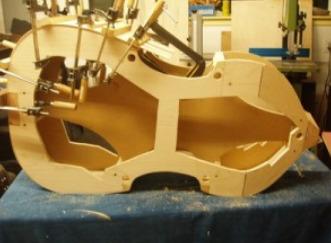 Upon  entering the workshop in Springfield, Oregon, nearly all senses are overcome with stimulation and with the stunning array of tools, instruments, construction, musical equipment, and wood which abound in the garage-sized space. About 15 upright basses (some are for sale, some are being repaired or built), lutes, guitars, banjos, ouds, violins, violas, cellos, and harps crowd the walls of the studio. The scent of cut wood and sawdust is inescapable, as the shredded material is lightly shuffled over by walking feet. Melodious echoes of bluegrass, jazz, old time, classical, and Celtic music waft from the turntable and through the arched ceilings as Heydon’s three colorful pet parakeets soar through the rafters, perching on scrap wood and double bass head scrolls. Like the traditional methods that Heydon employs in his craft, his workshop has the feel of old world artisanship, but at the same time he is paving the way for new technology in the trade. 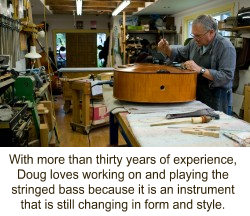 Heydon has a masterful understanding and amount of skill in all stringed instruments, but his specialty is the upright bass, an instrument which he has been proficient at playing and building for over 35 years. The bass is not the instrument that Heydon started learning music on however, it was the third instrument he learned, all before his early 20s. Heydon’s family members are classically trained French horn players, and Heydon followed a similar path for 15 years. This skill and musical knowledge helped Heydon become a talented guitar player, which led him to experiment with his woodworking knowledge on musical instruments, particularly his own. Through early experimentation on his guitar, Heydon gained an understanding of the inner workings of wooden stringed instruments. His skill in playing and repairing guitars got him a job with touring bands, where he worked as a performing musician and the bands’ instrument technician. As a member of a musicians’ union, he earned double pay while on the road for holding two occupations with bands in the early 1970s.

Heydon’s first venture into bass came when a member of the jazz fusion band Nudge, who he was touring with, told him in 1971, “You’re really a bass player. You need to go get a bass.” Heydon recalls the simple transition from guitar to bass guitar, which occurred after he purchased his 1973 Fender Precision bass. This furthered his ability to experiment on another one of his instruments and he purchased his first standup bass the same year.

“All basses are individuals. They’re enigmatic!” Heydon says, recalling his early 20th century era, 5/8 size German double bass that he bought in installments totaling $1,500, at age 24. When Heydon got this bass, he had the opportunity to work with an almost entirely wood canvas, which he experimented on and tooled around with. He even formed original concepts for a metal pick-up, stereo amplification system, something relatively uncommon for this instrument at the time. Heydon took the pickups from an electric P-bass guitar and applied it to different parts of the upright bass, trying to get the optimal sound. “There is a pretty big degree of intuitiveness when trying to get the right sound out of one of these,” Heydon mentions.

The satisfaction that Heydon got from forming his own innovation in the instrument that was to direct much of his life, brought him to Oregon, where he apprenticed at Bellwood Violin in Ashland. Since then, Heydon has been building, repairing, and playing upright basses all over the state. He finally settled in Springfield, where his luthier business, which operates from his home, has been thriving due to word-of-mouth advertising. 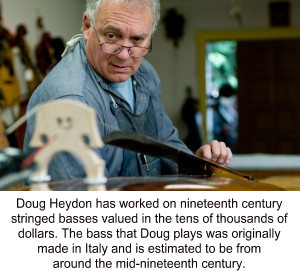 “My construction methods are very traditional,” Heydon says. With the exception of the use of power tools for the actual shaping of the wood for time efficiency, the building process is one that dates back hundreds of years. Dozens of wooden clamps and vices and recycled glass jars filled with self-mixed adhesives, varnishes, and solvents line the many shelves around the work bench. In the corner, a bass rests atop a table on its back with wood clamps lining the rim of the body after having been freshly glued. “One of the most important traditional methods is the gluing,” Heydon professes. He is a strong advocate of the use of hide glue, a traditionally made adhesive, which dates back to the ancient Egyptians. Unlike its modern counterpart synthetic glue, Heydon says that traditional hide glue works best for wood. “It helps to maximize its character. When you get to the end, you really have to use traditional methods,” he says.

According to luthiers like Heydon, wood has a life of its own. “There’s something about the cellular alignment—with the musical vibrations,” Heydon recognizes. If wooden instruments go too long unplayed, they lose vibrancy when they are picked up again. Heydon says that regularly keeping the vibrations running through the wood improves the instrument. “That’s why people like old instruments,” Heydon mentions through a smile while picking the strings of his Turkish oud, precursor to the Western lute, which is believed to date back to ancient Mesopotamia. He states that one of his favorite parts of being in his workshop is being able to replay the basses he has for sale, and “wake them back up.”.

Although he is traditional in many ways, Heydon has also recently been an outspoken advocate for the use of modern carbon fiber materials instead of wood. This most notably occurs in the fingerboard, the part of the bass extending down from the front of the neck behind the strings. “Traditionalists look down on carbon fiber equipment, even though structurally and acoustically it’s just as good,” Heydon says. As the only luthier who knows to utilize this technique, Heydon is so passionate about the instruments that he builds and repairs, that he takes these chances to improve a client’s experience with their newly improved bass. 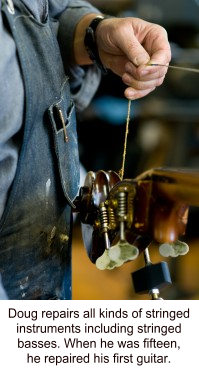 Thankfully for his satisfied customers, Heydon is a self-proclaimed perfectionist, which he says can can get in the way of his work as an artist. He has such a fervent connection to the instruments he is repairing that it ends up costing him, but with exponentially better results for the customer. Heydon admits that returning a client’s instrument can even be difficult for him, because he has poured so much devotion into it. Even when performing laborious, manual tasks such as sanding by hand, Heydon says that he is never bored by the process. “I just don’t want to do something that doesn’t keep me interested,” Heydon says while idly applying spots of varnish to the body of a 1940s f-hole Epiphone acoustic guitar.

This kind of dedication has given Heydon the reputation he has earned, even garnering the attention and business of local bassists Zac Sawyer of Eugene’s the Sawyer Family, and Dan Schmid of the internationally-known neo-swing group Cherry Poppin’ Daddies. One of Heydon’s current projects is a travel upright bass for Schmid, which he is creating as an original prototype for the touring musician. Like many of Heydon’s creations, it artfully combines traditional craftsmanship with innovative techniques — in this case a collapsible, wood neck held in place by string tension and easily dismantled for travel, as well as a sophisticated, embedded pickups system.

Heydon reticently acknowledges the modern decline of live music and the movement toward digital, electronic creations of music. He sees the work he does as more important than ever now though. “The passion for good music hasn’t changed,” he declares. Coming from somebody who has played live music in salsa and Celtic groups, not to mention in Chamber Symphonies and Marvin Gaye’s band, this statement has immeasurable potency. Heydon does what he does for true musicians who want to understand the steps that he takes and have as much care for their instrument as Heydon puts into it.

Currently, when outside of his workshop, Heydon tours with a band that he and his wife are in. They play ultra-traditional Celtic music, tracing the musical history and lineage back centuries. Additionally, Heydon explores and recreates the roots of Cajun music, from its beginnings in the Acadians in French Canada, to how it’s known today. He is working hard to perfect his hand at historic and super traditional banjo styles, to recreate the early Celtic and old-time styles of play. In addition to being an artist, Heydon is a true musicologist, finding styles of music in their original, most primitive point and tracing their formative evolution through time and location.

The level of musical knowledge and appreciation that Heydon displays inside and outside of building timeless instruments is incredible. He is never bored of the process, of learning, or of continuing to experiment with the creation and repair, the explorative spirit which propelled his knowledge and fascination in his early luthier days.

“With basses, there’s no standard. They are unique,” Heydon proclaims. He enjoys the freedom that luthiers have to be original and to truly authenticate their creations. “This work satisfies me.”

This piece was originally published at http://www.fluxstories.com/2010/06/carving-a-musical-niche/